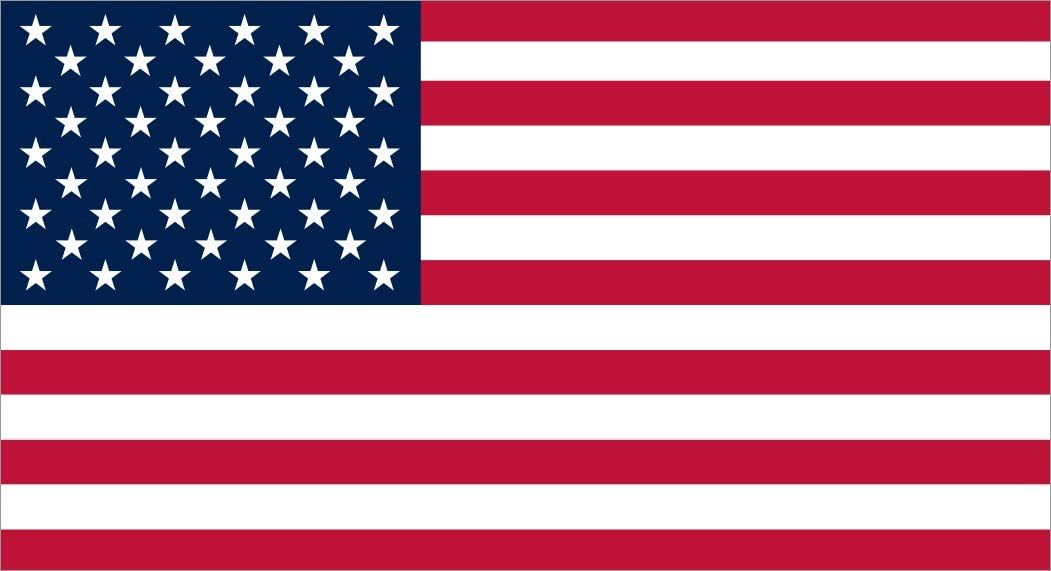 This sticker is 7 inches wide by 3.8 inches tall when applied. This sticker is printed with the easily recognizable red, white, and blue American flag. The pink line in the image shows where the product is cut. By displaying this quality-made sticker on your window, bumper, briefcase, or tablet, you’ll show your support and love for the country!

The Origin of StickerTalk:

The creation of a company that manufactures high quality stickers, signs, magnets, and more began before it was even an idea. It all started when the founder, Jason Chambliss, was only 13 years old. Him and his dad would purchase old, broken arcade game machines and restore them to their former glory in order to fill their rooms with fun machines or sell the ones that were not their favorites. Occasionally, a machine would arrive with the once-colorful art on the side destroyed or faded. In order to combat this issue, they purchased a small vinyl cutter so that they could make stencils for painting the side art on these machines. With this cutter, Jason learned to design and cut out "stickers" from the vinyl not used for the arcade machines. He would sell these stickers to friends and others from school, but the main purpose of the machine was still for the arcade game art. A little later down the road, with money saved up from selling the arcade games, they were able to purchase a larger commercial machine designed to print and cut on vinyl material. With this printer, they could print the side art completely and stick it to the sides like giant stickers instead of using stencils and paint, but there was still no plan of creating a company revolving around stickers. With the new machine Jason began to play around with making the same little stickers that he had made with the old cutter, but now he could print in full color. The designs improved and a couple new stickers were made, but instead of selling them to friends, they were listed online for sale. Amazement was all he felt when they actually sold a sticker for the first time online. With a new motivation, the arcade machines were moved aside and stickers began being produced. It was slow at first. There was still no intention of turning it into a business, but rather a fun hobby that might make a few dollars here and there. Soon, the whole family was in on the action. They were all taking part in the making of these stickers. More stickers were being created. The more they listed, the more they sold. In 2013, StickerTalk was born. Since then, StickerTalk has been built by the Chambliss family as well as several wonderful employees that have been hired along the way. With professional equipment and thousands of products for sale, they are far beyond the small arcade machine hobby that sparked this idea many years ago. Today, StickerTalk strives to deliver the best possible product for every customer who buys from them. With a vast number of products to chose from, there is a StickerTalk sticker or magnet for almost any situation. Yes, We Have a Sticker for That!

Only the highest quality materials go into the production of our stickers. The base of the stickers consists of a high tech vinyl and adhesive. This vinyl has micro-channels along the adhesive side of the sticker that allows air bubble to be smoothed out after the sticker is applied. Keep in mind, that dirt bubbles can't be smoothed out. The adhesive will stick strongly, but if you ever decide to take the sticker off, it will peel off without leaving behind sticky residue. Next, we print the colorful design onto the vinyl using Green Guard, solvent based ink. This ink allows us to print vibrant colors that will stand out. We could stop here and have a decent product, but we want all StickerTalk products to last. We take an additional step to laminate all of our products with a UV and scratch resistant film to ensure that the products will stand up against the elements without fading or cracking. Overall, StickerTalk is proud to produce the highest quality sticker possible.

Whether you decide to decorate your vehicle, or add flair to your binder or briefcase, this StickerTalk product is going to look great. Our stickers stick best to smooth, flat surfaces, such as windows, binders, or bumpers. Surfaces that are heavily textured, such as fabric, some leathers, and cloth, may keep the sticker from adhering properly. The stickers will adhere best when the surface is cleaned thoroughly before applying.

Proudly Made in the USA

The United States flag has a rich history and serves as a great symbol for the nation. You can show your support and patriotism by displaying this 7 inch by 3.8 inch USA Flag. We proudly produce all of our StickerTalk products in the United States.

Inspiration, opportunities and travel insurance to help you fuel your curiosity, find your journey and travel bravely.

We are World Nomads

Like you, travel is in our blood and exploring is our way of life. Our mission is to help you get the most out of your adventures and support you when things go wrong.

Simple and flexible travel insurance designed by travelers for travelers.

Stay safe and informed, before, during and after your trip with our expert advice and flexible travel insurance.

Buy cover for your adventure at home or while traveling.

Get timely safety tips, insights and alerts from our experts.

Know before you go

Find out how you can have a positive impact on your next adventure.

Give back to the places that you travel to. Make a micro-donation when you buy with us to help change lives.

85% of our travelers give back when they travel.

Make a difference to those communities in need in a simple, easy and transparent way when you travel.

Our community of locals and travelers share their advice and adventures to help you find inspiration and research your next destination.

Start planning your next trip with experiences, tips and travel guides from other nomads.

Feed your curiosity with first-hand accounts of discovery, connection and transformation.

Read the latest stories from the road

Listen to our podcast

Take your passion for travel writing, photography or filmmaking to the next level.

Get pro tips, techniques and advice

Go on the learning experience of a lifetime and be mentored by pro writers, photographers and filmmakers.

Apply for a fully-funded field assignment

Couldn't find what you're looking for? Do you want to...

Get cover for my next trip Plan a trip to... Be inspired Improve my travel storytelling skills Become a contributor Hide Drink, Deluxe Leather Bookmark, (7.5 in.) Long (2 Pack), Make a living from my passion Find out how to stay safe Join the community Find out what current projects we support

Coronavirus (COVID-19) and travel - Need to know before you buy

Some but not all of our policies provide cover for some coronavirus-related events – select your Country of Residence to find out more. Cover is not available for loss arising from: government intervention including travel bans, border closures or broadly imposed quarantine requirements; events for which the Government (see your policy) has issued a ‘Do Not Travel’ warning or its equivalent, for your destination(s); or failure to follow advice from official bodies. Your ability to travel may be affected by travel restrictions. Check your cover and the latest government advice and our travel insurance alerts.

Your country of residence is the country where you:

By telling us your country of residence we are able to provide you with the most relevant insurance information.

Or select your country of residence from the list